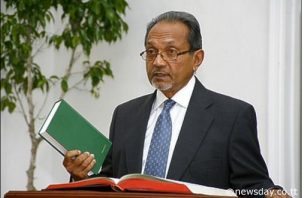 What does new installed Chairman of the Integrity Commission,  Retired Justice Zainool Hosein, Watson Duke and Ian Alleyne have in common?

A total disregard for media workers and consequently the people of Trinidad and Tobago.  At his swearing-in, Justice Hosein responded to a legitimate question posed by the Media by hurtling this insult at the Reporter: “You don’t either understand English or you’re not prepared to hear what I’m saying, I’m not dealing with the Retired Judges Association business at this interview, this interview is in relation to the Integrity Commission, okay?”

The reporter’s question was justified and deserved an appropriate answer.  It is my view that the Justice should have resigned from being head of such a powerful lobby group before accepting the position of Chairman of the Integrity Commission.  Instead he chose to hold on to two offices and hurl an insult at the media person who dared to inquire.  This behaviour is yet another example of a person being placed in a position of responsibility and immediately acting irresponsibly.

One can ague that one position does not materially affect another but we have all witnessed the daily abuses by officials in our country.  If they are not overpaying their family, they are hiring friends with manufactured credentials.  It is a period of low trust for public officials from Captain to Cook!  In order to regain the trust and confidence of the population office holders must reach for the moral high ground.  In this case, Justice Hosein was not presiding over his court, he was responding to the media and ought to have demonstrated a keener understanding of the role the media plays acting on behalf of the people.

Our history is replete with examples of office holders using one position as leverage to achieve objectives in another.  The position of head of the retired Judges association is important and cannot be easily ignored by any office holder.  Let us imagine that there is a matter before the Integrity Commission involving the person who can make a decision about the Pensions of retired Judges.  In the person’s mind, it is the same person with the authority and opportunity to make a particular decision.  It is easy to perceive that their action in one area will be influenced by an outcome they expect in another and vice versa.

If Justice Hosein has not yet resigned from one of these positions then I urge him to act with haste. Otherwise “How it go look?”