This is one of the letters which I have written to
Prime Minister Rowley over the past 5 years.

Congratulations on your 53rd month as Prime Minister of the Republic of Trinidad and Tobago.

It is almost 10 years since Despers was chased from the “Hill” by their children and the band continues to move from property to property in search of a home.

May I suggest that the property on which they now practice be converted into a National Pan Theatre and a home for Despers.  For many years the Government Printery was housed there which makes its allocation a simple exercise. Such a move by your government will not go un-noticed by the people of the “Hill” and the “Pan Fraternity”.

Yours in the interest of development.

Our new “Oil” is “Tourism” and this Keith Rowley-led Government better understand that, if they want to provide any kind of hope to this country. There a

re 3 areas for urgent action: destination marketing, increasing international arrivals and having a well-trained and certified labour supply.

The 2017 budgetary allocation by the Government towards the marketing and promotion of Trinidad & Tobago’s Tourism products was TT$19M (nineteen million TT dollars).  When compared to allocations in 2015 of TT$50M (fifty million TT dollars), this represents a significant fall by 62%. Two months ago, in July, the Ministry of Tourism confirmed that only TT$8M of the $19M was actually spent.  Spending TT$8M to market a diverse destination such as T&T is a waste of money.  You’ve got to either do it properly or not at all.  In addition to this lack of spend, the contracts for all of our overseas marketing representatives (except for the UK) were cancelled in October 2016 by the Ministry of Tourism with no replacement providers appointed. Thus, Destination Trinidad & Tobago has NOT been promoted in most of our main tourist source markets for the past year.

Consistent with this lack of spend is the fall in international arrivals.  The data says that over the first eight months of 2015 (i.e. by August), we welcomed 300,000 overseas visitors. For a similar period in 2017, overseas visitors has fallen to 275,000, representing an 8% reduction. This has had a direct negative impact on both hotel occupancy as well as room taxation remitted to the Government.

If you combine the reduced budgetary allocation, the lack of destination marketing spend as well as the Government’s continued and prejudicial withholding of GATE reimbursements and recurrent subvention payments to the Trinidad and Tobago Hospitality and Tourism Institute (TTHTI), what emerges is a Tourism Sector which is on the brink of collapse.

To avoid this collapse, the 2018 budget cater for the following:

The budget presentation is really an exercise in accountability. What is needed at stages 2 & 3 are wide collaboration on the plan for the sector and transparency with regard to how the plans will be executed.

Let’s do This …  Minister of Finance! 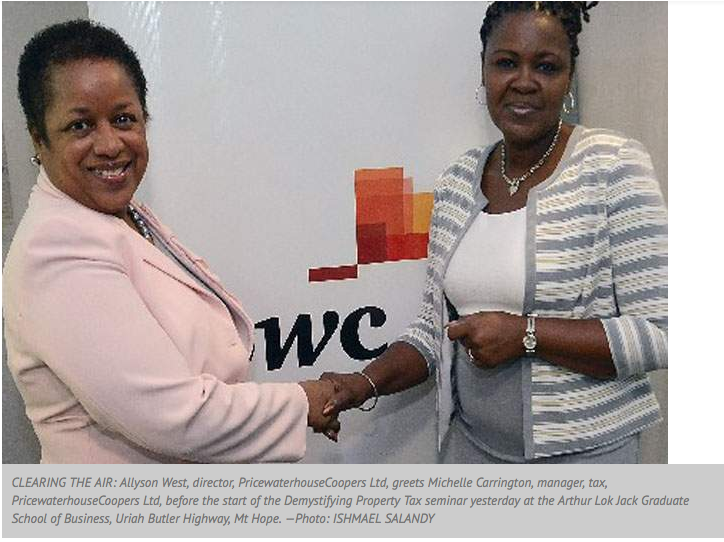 The appointment of Miss Allyson West as Minister in the Ministry of Finance may have raised an eyebrow or two.  The raised eyebrows are understandable especially since several of us were appalled when former Judge Volney jumped into the political ring straight from the Bench.  We asked where was the cooling off period or the distance that is required for sober reflection?

Yesterday Miss West was the Territory Tax Leader of one of the biggest and most successful Accounting organizations in this country.  She would have been advising on tax issues where large businesses are seeking redress or resolution of Tax issues with the government.  Today she is on the other side!  She is directly responsible for assisting the Government with the collection of Taxes.

In PWc’s Pre-Budget Bulletin 2017, and referring to the Sandals deal, Miss West’s document stated:
“While we appreciate that agreements of this nature require some level of confidentiality, we would encourage GORTT (ME) to be as transparent as possible on the fundamentals of the arrangement, with particular emphasis on the costs GORTT has to bear and the incentives granted vis a vis the expected returns to be enjoyed by T&T”.

By putting her hat in the ring, Miss West is now impaled on the horns of a dilemma where on the one hand, her latent memory will trigger issues she had been working on or providing advice for and on the other hand she could be asked to provide advice and or guidance to Officials on the way forward with the very same matters.
Further, PWc has a consultancy arm and the new Minister is now in close proximity to decisions about arrangements which could benefit her employer as of yesterday.  In whose interest will Miss West ultimately act? Of course she is a professional and will serve the best interest of Trinidad and Tobago.
I would like to believe that but must express my feeling of unease.  The jury will be out for a while!  Until then, congratulations to Miss Allyson West, yesterday’s Territory Tax Leader for PWc and today’s Minister of Finance with responsibility for Revenue Collection.

Athletic prowess on display … a rhythm section vibrating and people cheering, paying tribute to talented young men and women who continue to test their bodies and minds in their quest for Olympic glory. For the majority of the athletes at the Hasely Crawford Stadium, this weekend was their moment of glory. Their athletic careers will wind down while for a few and I mean a few, it marked the start of a heady road to the 30th Olympiad – London 2012. Congratulations in advance to our qualifiers.
Throughout the world several Olympic qualifying meets were held over this past week-end. I followed the US and T&T’s. Congratulations to the NAAA’s for a well organized activity at the Hasely Crawford Stadium. The hype was increased by BP’s global campaign and template approach to advertising. Great stuff but it can’t end with the London 2012.
Trinidad and Tobago needs a plan which will nurture and encourage Athletic talent.
We continue to do well particularly in track and field because of the single handed dedication of a “hand full” of persons who seem to thrive on the physic rewards they enjoy from giving. These men and women continue to earn my total respect.

Over the years several different plans have been developed for sport in our country but with each new administration comes the abandonment of the previous plan. We seem to have forgotten that in a population of just over one million the talent pool is small so it is not wise to try to re-invent the wheel simply because the face of the Minister of Sport has changed. Nothing has happened in the past two years to give me the confidence that sport is on a serious radar. Some officials are anxiously awaiting London 2012 for a moment of glory but if we do well, it will simply be a moment of glory and no thanks to officials. Sustained good performance will continue to elude us until we engage in serious planning and make sport the weapon of choice of our youth.

If a nation does something for 100 years, they will get it right. Jamaica’s “Champs” has been staged for 100 years. So when Usain Bolt burst onto the scene it was not by accident. Jamaican athletes have worn their yellow and green in front of thousands of cheering supporters for 100 years. When Bolt’s coach said that there is a line of top performing athletes just waiting to dominate the world’s track and field stage, he is not joking. The world is literally flocking to Jamaica to train with the best and absorb whatever is on offer.
As Chair of the cancelled Caribbean Games 2009, I attended the 100th Anniversary of Jamaica’s premier track-and-field event. This activity is indelibly seared onto my consciousness and feels like yesterday. The invitation was extended for me to attend “the premier track-and-field event of its kind in the world”. That’s how it is positioned and “Champs” as it is fondly known had humble beginnings before becoming the “Inter-Secondary Schools Sports Association Boys and Girls’ Athletics Championships”.
Apart from having consistent sponsorship “Champs” represents the Athlete’s moment of glory on a home stage. Imagine the impact on a young athlete of running in front of a packed to capacity stadium (more than 25,000 persons). When that Athlete makes it on the world’s stage he/she has confidence because he/she has performed at home and drunk of the energy of his/her own people.
In addition, “Champs” is a grass root activity for which the average Joe Jamaican will find an old school tie or socks or t-shirt or undersized shorts and proudly strut their stuff at the games rooting for their secondary school and re-living long lost memories. When an activity assumes the cultural significance of “Champs”, it is an easy sell. But “Champs” is more than the expression of sport and culture, it is the culmination of years of hard work.
In a recent interview with Larry Romany, President of TTOC (the Trinidad and Tobago Olympic Committee) he alluded to the Jamaican model for the development of athletes and said: “Jamaica puts a physical education teacher, a qualified physical teacher into every school, but more than that, each physical education teacher in Jamaica is actually qualified in track and field so they are a coach as well as a phys-ed teacher and they go into the system, and that is why Jamaica has had such success because there is a focussed attempt, a strategic intent on creating track and field stars”.
What is so difficult about implementing such a model in Trinidad and Tobago? We need to recognize that our only resource is our people and there must be significant investment in their development but lest that sounds hollow, I’ll quickly add that the investment is really finding a way to ignite the fire of patriotism which is now dormant.
During my Caribbean Games experience, my mantra was “Sport must become the weapon of choice for our youth”. I still believe in the potential and possibility of this statement but it will only become a reality when we devote the time and effort to craft the strategy for the sport industry. Of course, this has been done before but our leaders choose not to build on previously laid foundations but to smash any bases that exist. As blood fertilizes our land and our people flounder it is urgent that we put a strategic plan in place to capture the imagination of our youth and fire up our people’s passion for sport. Whatever we do, there is the grim recognition that it may be another generation before we reap the rewards. But if action is taken now, my generation may pass-on confident in the knowledge that our future sports persons will thrive in a nurturing, passionate environment.