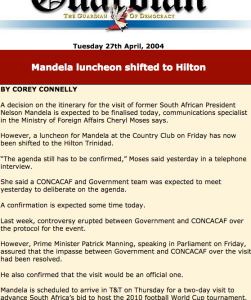 “.  I now ask the question … will Chief Servant Makandal Daaga and Mrs. Liseli Daagaor or Bro. Khafra Kambon be at the UNC meeting at the Trinidad Country Club.  And if we rewound the clock to (2010) the year of their ascendency to political office how would this article have been re-written:  END_OF_DOCUMENT_TOKEN_TO_BE_REPLACED

A woman vigorously scrubbing clothes on a “jukin” board.  She stops and bellows a sarcastic remark clearly directed at someone but indirectly made and understood by all.  This is how “throwing words” can be summed up and was practiced “behind the bridge” where I grew up.  Never had I considered that this practice would be elevated to the highest office of our country.

What would motivate the President to engage in such a practice?  Who was he referring to in his statement about “rumshop logic”? Does he expect a response in like manner?

My expectation is for the President of the Republic of Trinidad and Tobago to use his office to exhibit exemplary behaviour.  If he has a problem with anyone about anything, he has the power to summon that person and have a conversation.  But to engage in “throwing words” is to bring the office to an unacceptable level and to abandon a fundamental tenet of communication.  “Direct communication is the most effective form of communication”.