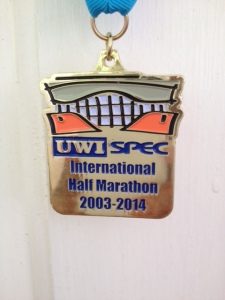 should run the “UWI Half Marathon 2015”.  It will provide long term focus on a common goal and an experience of oneness that can only be earned by each person’s singular effort for the team.

UWI/SPEC INTERNATIONAL HALF MARATHON 2014 was an outstanding experience.  I am however disappointed that  24 hours later, the results are not yet on-line and available.

The Race organisers finally made the sensible decision to begin the race half hour earlier at 5:30 am and that made a positive difference especially to those of us finishing in more than 2 1/2 hours.   Thankfully the weather was on our side with great cloud cover for most of the race.  The course was well resourced with water and the Police did a great job of keeping the course closed.

The inclusion of drumming, tassa and steel band at strategic locations made for enjoyable distractions away from the focus on my aching body.  People line the course to cheer, jeer or heckle the runners as they see fit but Her Excellency seemed to be singled out for special treatment.  From the chant of “Go Reema!, Go Reema!, Go Reema!” to “Rachel Price waiting for yuh up de road”.  Along the way a friend handed me a beastly cold “Powerade” which I gulped but had to reject the “shot of white rum” offered by a group calling themselves “Road Rummers”.  They set up near to the seven mile marker with their table

and beverages and warmly offered shots to the runners.  Not sure if they had any takers!

The finish was sweet as I simultaneously chased and urged on a young women.  As we bounded towards the finish line, the feeling of accomplishment was ripe.  Running a half Marathon is hard and there is so much to learn and so much to be thankful for.  It is always about the effort of the collective … the members of Trinidad and Tobago Road Runners Club (TTRRC) who selflessly give advice and guidance during training … family and friends who support the training efforts … the hundreds of volunteers manning the aid stations … the Police directing traffic and the Runners who just by putting one foot in front the other and refusing to quit inspire their fellow runners to do the same.

When your country has the highest rate of cancer mortality in the Americas, Cancer detection a

nd prevention moves from being an NGO problem to a national problem.  And when the evidence indicates that Breast cancer has the highest mortality rate among women in T&T, you – as a Government and particularly the Minister of Health must be having sleepless nights over this mortality rate.  (That’s if you care!)

In this scenario, it is discomforting to read that “a bank has contributed 1M$ and is appealing to citizens to match their pledge in order to buy a mammography machine”.  On the other hand an NGO would have to stage at least one thousand 5Ks to raise funds to purchase the machine.  Somewhere the priorities are wrong.

Mortality from Cancer and Breast Cancer is now a national epidemic which can only be stemmed by early detection.  For less than one eighth of one mile of the proposed Debe to Mon Desir Highway, we could purchase  2 machines for each constituency.  Then we could invite NGOs to help run the Mammography centres.

Even if the published estimated cost of the Highway is exaggerated, we may have to forego half a mile, but the point is, it is mind boggling to consider that one mile costing more than three hundred million when weighed up against other urgent needs of our country.

In the field of Human Resource Management, it is often said that poor performance is a manifestation of poor selection.  If you invest in a rigorous selection process, your chances of having poor future performance will be minimized. This unfortunate “Pre Action Protocol Letter (PAPL)” from the Office of the President to a “2-bit” comedian is unfortunate and provides me with a little more evidence that the selection procedure was and is flawed.

Why is the President so sensitive about his wife’s dress?  What else is happening to raise his sensibilities?  What else is he trying to shield from public discussion via comedians and calypsonians?  Why would this President, who in a not so past life was an active participant in the culture of Calypso, Picong and Liming take such a heavy handed approach?  Why would the President so easily embrace the recently coined PAPL strategy to dampen discussion?

Her Excellency Mrs. Reema Carmona joins a list of bland but dignified first ladies whose occupation of office inspired little to no reaction or commentary.  I welcome her youthful vibrancy but this must always be informed by appropriateness.  In this case, the stark difference between the attire of Mrs. Ban Ki-Moon and Mrs. Carmona made me cringe.  In the past I have thought to myself: tacky, loud, simple when I have seen her outfits but this one was over the top.

It is unfortunate that it has become a legal issue.  A simple emissary whispering in Rachael Price’s ear would have made a difference.  Instead the PAPL has dignified poor humour and improved her popularity.

Our Prime Minister, the first woman PM of Trinidad & Tobago broke our hearts.  2010 made us proud that a woman had taken over the leadership of the country and provided a moment for us all to dream of equalling this achievement in other areas.

The hallmarks of her leadership have been disputes and confusion.  4 years and 5 months later, she is mired in controversy of every kind: from corruption and bribery allegations to the callous response to Dr. Wayne Kublalsingh’s hunger strike.  I expected by now that she would have reached out in some way to put action behind her rhetoric that she will “serve the people, serve the people, serve the people”.  Instead there was the token 2-minute visit with her Minister of Health.

This has been followed by several attempts to discredit the “Hunger Strike” and suggest that Dr. Kublalsingh is not exhibiting signs of a person in crisis.  On each occasion that the PP Government has come up against any formidable opposition, they have used a similar strategy – to discredit the person, in the full confidence that some mud will stick and eventually doubt will be created about the issue.

In this case, the PM’s intention is to change the conversation and divert attention away from the Armstrong Report.  Here are 3 critical recommendations:

The HRM has received a fillip from some non aligned youths who have joined the struggle and are conducting their own fast for 40 days.  I am inspired to see young people participating in our democracy and wish that they attract many more from their cohort to occupy the HRM camp opposite to the Prime Minister’s Office.  Dr. Kublalsingh has done his part, it’s now time for us to support him.

Madame PM, as your term in office comes to an end, please honour your promise to serve the people and come to the table with Civil Society and the HRM.  History will NOT absolve you!

What makes societies change for the better? First, someone must take a stand against injustice and wrongdoing – Sir Thomas Moore, Rosa Parks, Ghandi, Malala.  Second, others must have the courage to join in challenging those in power.  Successive governments in T&T are testimony that “power corrupts and absoluter power corrupts absolutely.”

Every day in T&T, politicians serve themselves instead of the people and the only weapon we use against them is picong and jokes.  We fail to use the power we have in a democracy.

Our political system comes from the UK.  Kings and Queens of England used to chop off the heads of those who did not agree with them.  Now the Queen answers to Parliament and when politicians misstep, they resign immediately.  Why?  Not because they are any less greedy and selfish, but because they know they will be publicly shamed and humiliated for wrongdoing. The people – with the press leading the way – hold them accountable.

In T&T, the reverse happens. Politicians humiliate those who challenge them – usually by saying they are mad. Because news in T&T focuses on what politicians say, they need only keep saying this for their self-serving opinion to become accepted.

One man has ruined his health and now places his life on the line again to hold the politicians accountable. All he asks is that the politicians stop and consider before continuing with a possibly unnecessary section of a highway that will destroy 13 communities and their livelihoods, and could destroy the environmental balance in the South West peninsular – perhaps leading to regular floods as in POS since the reclaiming of the swamp.

Politicians only account to the people when enough of us demand this. Wayne Kublalsingh and the people living under a bulldozer have given us a golden opportunity to reshape our politics. If you wait until the bulldozer is outside your door, it will be too late. 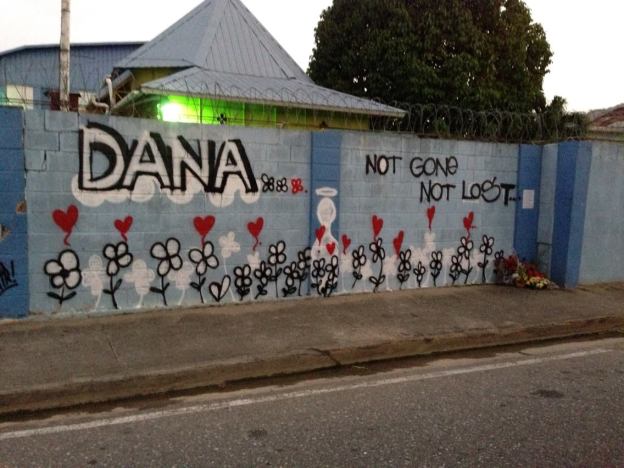 There is public outrage that the Trinidad Express has endangered the lives of the beneficiaries of the estate of the late Dana Seetahal by publishing the details of her will.

I am more concerned by the last few lines of the story:

“Dana Seetahal, SC, was shot dead on May 4 while driving her Volkswagen SUV along Hamilton Holder Street in Woodbrook.   She had just left the popular Ma Pau Casino nearby, when gunmen opened fire, shooting her five times.   No one has been arrested for her murder.  At the time of her murder, Seetahal was one of the prosecutors assigned to the Vindra Naipaul-Coolman murder trial, which is still ongoing”.

Would people have been so vociferous if they felt safer in our society?

As the days pass and the likelihood of laying charges against the perpetrators of this crime recedes, I wonder how our first female Prime Minister feels.  Is the Prime Minister now numb to the callous murders which occur daily or does she see them as just hard luck.  I wonder if images of Dana float through her mind as she drifts off to sleep.  Dana must not simply be another statistic.  The popular view is that this was a planned hit, designed to snuff out a voice of reason.

The outcome was not simply the assassination of a fearless attorney, it was another assault on our state and indeed on our democracy.  When our mistrust of the state and the institutions designed to     protect us is eroded, we are near to anarchy.