How could it be a “Baby Bandit”?

My attention was attracted to the sobriquet “Baby Bandit” in reference to a slain youth-man who turned out to be known to the Police and the community. Both groups knew this person to be euphemistically “walking on thin ice”, allegedly involved in criminal activity. His death was recorded as #297.

The name is interesting. What would inspire the stringing together of these two words to describe a person. What is the symbolism behind the name “Baby Bandit”. Was he a bandit from birth and if so how? Was he born of a bandit? Was he following in the footsteps of a senior bandit? These questions and more swarmed in my head as I tried to find relevance and meaning. Even more perplexing was that in the same paragraph the following words were closely juxtaposed: baby, bandit, 297 and murders.

If this is not a wake-up call to cause us to change the game, then I don’t know what is. “Baby-bandit” is an acknowledgement of the Hobbesian perspective that: “life outside society would be solitary, poor, nasty, brutish, and short” without a Sovereign who has the right to inflict severe punishment on anyone who stepped out of line. This is in fact the role of the government. Citizens agree to give up some of their rights in exchange for the Sovereign (in our case, the state) taking responsibility for ensuring a certain kind of protection for all of us to exercise some other rights. So far, successive governments have failed miserably in this responsibility. The murders are daily occurrences while the UNC and PNM squabble in Parliament and throw shade at each other. The low voter turnout in the recent Local Government Election is another message from the electorate, particularly the young voters, of their disaffection with these parties who are jointly responsible from bringing us to our current sorry state.

I keep dreaming of a collaborative approach to solving this pandemic of criminal activity and while it might be a pipe dream, I shall continue to live in hope. In the run-up to the 2015 General Election, the People’s Partnership manifesto made 59 references to crime and this is how it crafted Pledge #6 to the people of Trinidad and Tobago: “The People’s Partnership is firm in its zero-tolerance approach to crime. Our unequivocal commitment is to preserve law and order and to rid the country of the blight of crime. Crime and law and order remain the number one issue facing our country and this is our top priority for our second term in office”.

OK, so you did not get the second term you hoped for but the crime is even worse than when you left office. Why can’t you adopt a bi-partisan approach for the sake of the country you claim to love?

On the other side, the PNM Manifesto stated “The PNM will simultaneously reform, upgrade, modernise and transform our Police Service and utilise the strength of partnerships through an inter-agency approach. The new approach to fighting crime will focus on Regional Corporations and Municipalities. This will facilitate the establishment and operationalisation of Community Safety Partnerships (CSPs).”

Was this mere word-crafting to win votes?

Crime is the major anxiety of our people and provides an opportunity to demonstrate true leadership by both Prime Minister, Dr. Keith Rowley and Leader of the Opposition Mrs. Kamla Persad-Bissessar. History will reserve a special place if they are able to demonstrate leadership by confronting this major anxiety and committing to its resolution. If they are able to take a collaborative approach, they will have signalled a new era in the history of Trinidad and Tobago.

If they chose to continue the “one-upmanship game” they will have consigned us to a life of continuous bickering and fighting. In the absence of collaboration, their joint legacy will be the introduction of the reign of “Baby-Bandit” as the blood of our people wash the streets of Trinidad and Tobago. History will not be kind to either Prime Minister, Dr. Keith Rowley or former Prime Minister Mrs. Kamla Persad-Bissessar. 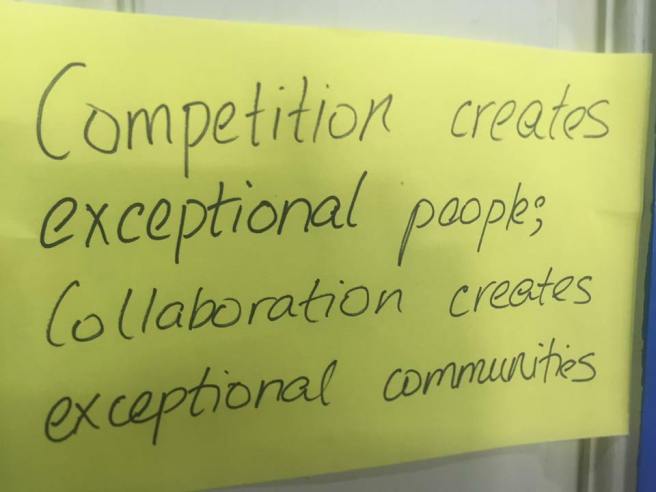 Since 2005 there have been allegations of sexual harassment levelled against Dr. Rolph Balgobin. To quote an Express Newspaper report of January 04, 2017:

“Former  (Arthur Lok Jack) ALJ Chairman and (at that time) University of the West Indies Principal Clement Sankat yesterday confirmed that he had inherited the issue when he became Chairman.”

He said that,  “… there was an issue dealt with at the board. The result was that he [Dr. Balgobin] resigned and a new director was appointed. There was a discussion with Rolph on how to manage relationships in the future,”

Leaving one to assume that all he got was a slap on the wrist, effectively.  This is the unfortunate level of protection which the “patriarchy” extends to its members and it’s time to put an end to it. Dr. Balgobin must not be allowed to retreat from this issue while the wounded women remain the subject of whispers and “couyon mout”*.

In the same newspaper article:  “A former director told the Express yesterday that if Balgobin had not resigned, he would have been fired”.  This suggests that at least some of the directors acknowledge that what he did was wrong.

Despite this major cloud, this Dr. Rowley-led PNM Administration appointed and retained Dr. Balgobin as Chairman of Angostura Holdings Limited, flying in the face of demands for his removal pending a transparent, independent and thorough investigation about the allegations.  In fact, women received a metaphorical slap to the face by the administration’s support for the expenditure of more than three million dollars (some of it belonging to taxpayers) to defend Dr. Balgobin.  The “patriarchy” is alive and well in this country and women will continue to be peripheral to core decision making.

There are at least 3 reasons why the new Chairman of Angostura, Mr. Terrence Bharath must commission a transparent, independent and thorough investigation into this matter.

Firstly, there is a need for closure on this matter.  The majority of Angostura’s employees are female and every effort must be made to assure them that the matter has been fully ventilated and resolved.  An effective resolution will also send a powerful signal to women throughout our country that organizations are prepared and willing to take the necessary action to ensure safety and equality in the workplace.

A second reason is to demonstrate that as the new Chairman of Angostura Holdings Limited he is committed to ensuring that Angostura retains a sound reputation amongst a significantly large portion of their customers.  Organizations must never underestimate the spending power of women.

A third reason is that Chairman Bharath must demonstrate his commitment to a process which is procedurally fair and transparent.  There is an old saying, “Your actions speak so loudly that I cannot hear your words.” In this case, if the Chairman allows silence, he will be signalling by his actions that he is prepared to turn a blind eye to allegations of sexual harassment.

That would be an unfortunate note on which to begin his tenure!

*”Twist the mouth in the direction of someone you wish to ridicule especially without them seeing”.