Needed – A Strategy for Sports 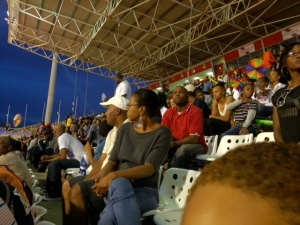 Athletic prowess on display … a rhythm section vibrating and people cheering, paying tribute to talented young men and women who continue to test their bodies and minds in their quest for Olympic glory. For the majority of the athletes at the Hasely Crawford Stadium, this weekend was their moment of glory. Their athletic careers will wind down while for a few and I mean a few, it marked the start of a heady road to the 30th Olympiad – London 2012. Congratulations in advance to our qualifiers.
Throughout the world several Olympic qualifying meets were held over this past week-end. I followed the US and T&T’s. Congratulations to the NAAA’s for a well organized activity at the Hasely Crawford Stadium. The hype was increased by BP’s global campaign and template approach to advertising. Great stuff but it can’t end with the London 2012.
Trinidad and Tobago needs a plan which will nurture and encourage Athletic talent.
We continue to do well particularly in track and field because of the single handed dedication of a “hand full” of persons who seem to thrive on the physic rewards they enjoy from giving. These men and women continue to earn my total respect.

Over the years several different plans have been developed for sport in our country but with each new administration comes the abandonment of the previous plan. We seem to have forgotten that in a population of just over one million the talent pool is small so it is not wise to try to re-invent the wheel simply because the face of the Minister of Sport has changed. Nothing has happened in the past two years to give me the confidence that sport is on a serious radar. Some officials are anxiously awaiting London 2012 for a moment of glory but if we do well, it will simply be a moment of glory and no thanks to officials. Sustained good performance will continue to elude us until we engage in serious planning and make sport the weapon of choice of our youth.